WAVES initiated a forum i.e. "VEDIC WAVES Blog" for discussion and exchange of Ideas. We welcome you all to actively participate & share your views. Thank You!!

Ms. Banerjee is a practicing attorney at a Fortune 500 financial services company.  She specializes in corporate tax law and worked in the New York and London offices of Sullivan & Cromwell LLP.  She co-edited the book, Invading the Sacred: An Analysis of Hinduism Studies in America.  She has published several essays on Hinduism and the Hindu-American experience in publications such as Outlook India and Swarajya, including “Hindu-Americans: An Emerging Identity in an Increasingly Hyphenated World”, which was included in The Columbia Documentary History of Religion in America since 1945 and “Hindu Pride”, which was included in Buddhists, Hindus, and Sikhs in America: A Short History (Religion in American Life). She earned her Juris Doctor from Yale Law School and received B.A. in International Relations, magna cum laude, from Tufts University.

Rama is one of the most exalted figures in all of Hinduism, yet we find him very much maligned today.  Scholars like Wendy Doniger accuse Rama of abandoning Sita because he was afraid of becoming a ‘sex addict’.  Movies like Sita Sings the Blues and Fire reinforce this stereotype of Rama as a patriarchal misogynist who oppressed and abused Sita.  Such interpretations have skewed public perceptions into thinking of Rama as a woman-hating, stuffy, self-righteous, sexist god-king.

In the face of such anti-Rama propaganda, it is hardly surprising that Rama has become unpopular in some pockets of the Hindu community.  As soon as his name is but uttered, modern Hindus immediately denounce him for his cruelty towards Sita.  But it is time that we start the process of rediscovering his glories, his true, effulgent nature, the sweetness and nobility of his personality and the manifold reasons why he is Maryada Purushottom.

A strange twist of events led me to Rama.  I have always been a devotee of Krishna, and up until several years ago, I thought of Rama as a stern, overly serious prince who could never laugh, sing or dance—in short, as a sad contrast to my ever mischievous and world-delighting Krishna.

Then, one day, my spiritual preceptor suggested that I add a particular picture of Rama to my puja room.  As I started worshiping that image, my heart began to soften towards Rama.  At the same time, I was reading a biography of a powerful siddha yogi who was a devout follower of Rama, and something interesting happened.  My iPod used to be on shuffle mode and I had thousands of songs to cycle through so that no one song repeated very frequently, but while I was reading that book, a particular kirtan on Rama (the Sri Ranamana Sankirtan as sung by monks of the Ramakrishna Mission) kept repeating on the shuffle mode, at least once a day and sometimes even more often.  That kirtan entranced me and made me love Rama and feel close to him.  I took it as a benediction from that great yogi.

Finally, I felt that I should read the Valmiki Ramayana.  I was determined to not rely on commentaries or popular retellings or heavily abridged versions, but to instead go for the most authentic translation that I could find in English of the unabridged text.  In delight, I discovered the Gita Press Gorakhpur translation.  I started reading it, and I was amazed.  Reading the Valmiki Ramayana is unlike reading any other book in the universe.  It fills you with tremendous peace and serenity.  The poetry of it is so pretty and poignant; the characters of Rama, Sita, Lakshmana, Bharata, Hanuman, and so many others, shine forth with their idealism and nobility.  Most of all, the depiction of Rama is so utterly different from the vilified version of Rama fed to us by mainstream culture and media.

Valmiki’s Rama is tender, full of valour and noble idealism, deeply loving towards all of his family, a kind, compassionate, gentle young prince.  At the end of the war, when Indra grants him a boon, Rama asks that all the vanaras (members of the monkey army) who selflessly gave their lives for him in the war against the rakshasas be brought back to life.  That is the kindness of Rama. 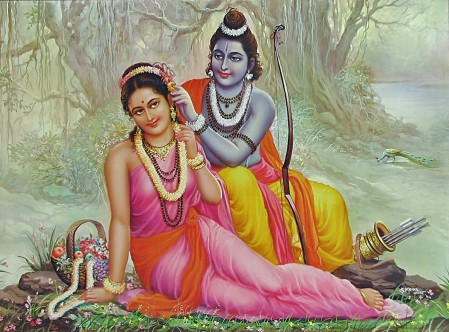 The love and adoration Rama has for Sita is unparalleled.  In their time together, he is ever solicitous of her comfort.  One of the most renowned commentators of the Valmiki Ramayana, the eloquent orator, V.S. Srinivasa Sastri, describes the time they spent together in Ayodhya immediately after their wedding as follows:

‘The Poet has no words good enough to describe the closeness of the union, of the ways in which husband pleased wife and wife pleased husband. …  They read each other’s thoughts readily; in fact these told each other what they wanted.  The tongue and the lips did not play any part nor perhaps did the eyes; heart spoke to heart.  Hridaya and hridaya commingled.  The desire of each was known to the other.  It is difficult to say who loved whom the more’ (Lectures on the Ramayana, The Rt. Hon. V. S. Srinivasa Sastri, Madras Samskrit Academy, 2006 (pp. 23-24).

One of my favourite stories from the Ramayana is the story of the crow.  Once, in Chitrakuta, Rama was sleeping with his head in Sita’s lap.  A crow appeared and pecked at Sita’s chest with its beak, causing her discomfort.  When Rama saw the suffering of Sita, although it was not serious, he became as enraged as a hissing snake, and with eyes rolling in anger, he took a blade of grass and charged it with the power of the Brahmastra missile, making that blade of grass blaze forth like the fire of universal dissolution, and hurled it at the crow.  Such was Rama’s devotion to Sita.

When Rama learns of Sita’s abduction by Ravana, he is so distraught and devastated, so utterly lost without her, that he can hardly function for his grief.  It is Lakshmana who has to rouse him to anger, to fight, to take action to win her back.  Sastri again describes this beautifully:

‘We have seen already that the love that drew Rama and Sita together was most remarkable.  When she was lost to him there was no limit to the grief that he bore … He could not find any rest being away from her.  He nearly went mad.  He wandered from place to place in the forest.  He raved.  He implored the trees and hills and rivers.  He threatened the gods with destruction of the world.  He threatened to take his own life.  Lakshmana was hard put to it to comfort him in this extreme sorrow’ (Id., p. 26).

This is not the mark of a misogynistic man; this is the story of a man who deeply loved his wife but who simply loved honour (Dharma) more.

And that brings us to the event that has become the stick with which modernists so gleefully beat and defame Rama today—the banishment of Sita to the forest after their return to Ayodhya.  The main point to be made here is that the entire section of the story in which this incident takes place, the Uttara Kanda, is not accepted by experts of the Ramayana as part of the original Valmiki Ramayana.  In other words, the main crime of which Rama is accused is not even part of the original tale!  It is held to be a later interpolation.

The original version of Valmiki Ramayana ends after the Yuddha Kanda, upon Rama’s victory over Ravana and his and Sita’s triumphant return to Ayodhya.  The phala shruti of the Ramayana is also included at the end of the Yuddha Kanda, making it the logical ending point of the story since the phala shruti must occur at the end of a text and not in the middle of it.  Further, in the summary retelling of the Ramayana that is included in the Mahabharata, no mention is made of the incidents (including the banishment of Sita) that take place in the Uttara Kanda.  Finally, there are references to certain kingdoms and peoples in the Uttara Kanda that identify the verses as being of later origin than the original Ramayana.

Part 2 of this blog will examine the events of the Uttara Kanda and show how, even taking into account that later interpolation, Rama cannot be accused of being a misogynist or in any way evil or oppressive.