WAVES initiated a forum i.e. "VEDIC WAVES Blog" for discussion and exchange of Ideas. We welcome you all to actively participate & share your views. Thank You!! 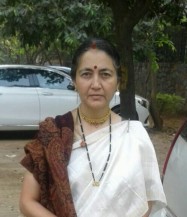 I had been living a life of a modern career woman with a flourishing profession as a management consultant to many MNCs way back in 1990s. I got introduced to spirituality as a tool of Behavioual Science as is prevalent in our society today. I had a traumatic personal life with much confusion about customs and values. Destiny led me to a situation where I could jump to a new challenge of a ‘Life for Yajna’ (यज्ञार्थात् कर्मणोन्यत्र लोकोयं कर्मबन्धनः….Gita 3.9) rather than ‘Spirituality for Material progress’. Suddenly, I found myself learning and practising Vedic Life far removed from our familiar city life. A flood of some latent memories of Achara (Customary practices) came to me and I started understanding Spirituality not as a distant learning but something which I had left incomplete in some previous attempt due to some mischief or loss of patience (पूर्वाभ्यासेन तेनैव ह्रियते ह्यवशोपि सः…..Gita 6.44).

We were staying on the banks of River Narmada in Gujarat at that time. We had an Ashrama away from any village leave aside any town. We started with a purifying performance called ‘सर्वप्रायश्चित्तं’ in the presence of learned Brahmins of all the four Vedas. Our Guruji had taught my Pati our ancestral Shakha called Taittiriya Yajurveda. We now wanted to practise Karma Yoga as the Chosen Path.(लोकेस्मिन् द्विविधा निष्ठा पुरा प्रोक्ता मयानघ। ज्ञानयोगेन सांख्यानां कर्मयोगेन योगिनाम्। Gita 3.3) We decided to undertake a life of Grihastha with mandatory Panch Mahayajnya.(पंच वा एते महायज्ञाः..) Besides, we decided to share our learnings with whomsoever wishes to but in the prescribed fashion.

Two brahmacharins came to us for learning Veda. We had a small piece of land to cultivate and we bought a cow to complete our duties of fire worship etc. Narmada was 150 steps below and we chose not to have electricity, water-supply, road or telephone. We did keep a scooter to do a fortnightly visit to the nearest town Rajpipla. 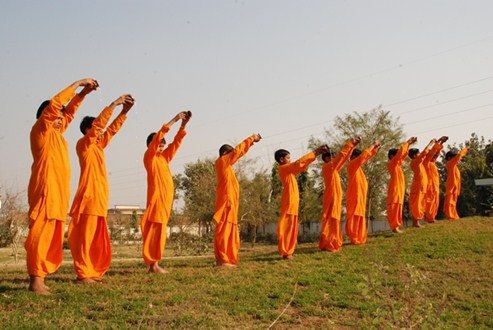 The day starts early in the dark hours of pre-dawn. I would get up even before Acharya and Shishyas. I started with putting on the oil-lamp. Then I would visit the cow-shed to cleanup the cowdung. We will require this cowdung for making round-balls for preserving the household sacred-fire (गृह्याग्नि) incessantly. This practice is prevalent throughout the present day Vedics but I am told that this is just an Apad-dharma or contingency. They say, unknown to many practising Vedics, Vedas have no mention of using cowdung as fuel. [Footnote 1: Anyways, this is what we used till we shifted to Garhwal Himalayas. This part of the story will come in due course. But in short, over there we had an access to abundant dry firewood in the forest and a practise of keeping perpetual fire on logs of wood, without depleting the forest, by judicious cyclic usage.] After cleaning the cowshed, I would throw a bundle of dry fodder or green grass cut the previous evening from the fields to the cow as was the practise in Gujarat and come back to the hermitage. Meanwhile, Acharya would be sitting in the verandah surrounded by yawning young shishyas. They would be doing Pratah-smaranam. I also know the chants by everyday use but I never needed to learn them. प्रातरग्निं प्रातरिन्द्रँ हवामहे। प्रातर्मित्रावरुणा प्रातरश्विना। प्रातर्भगं पूषणं ब्रह्मणस्पतिम्। प्रातः सोममुत रुद्रँ हुवेम। They would be chanting this Sukta after their Apam-upasparshanam, splashing water on the face and sipping. He would ask them to drink cool water kept in the night in copper-vessel. And even I would drink some warm water. We used to go for bowels in woods at a distance and nearby for urination. [Footnote 2: Smritis have a detailed description of this मलनिर्मोचन. We admit that with the ever-shrinking space for human inhabitation, this is almost irrelevant now. But, Acharya tried to practise the prescribed way and he observes that the texts are very careful in maintaining hygiene and also respect the Mother Earth, Wind, Waters, Fire, Directions and Sun, all as Devata. This leads to a very healthy nature-friendly life, though we may find it cumbersome. We may envy their extravagant natural resources, the luxury of wild country-space.] This शौचमाचमनं is going on along with morning class of Veda-Avritti. This used to be hilarious or sometimes painful also for the young ones with all their sleepiness. They would be reciting with the Acharya doing Dhyanam or contemplation. This is the time which gives the best of insights into Past, Present and Future. Acharya would sit peacefully while I would dust the rooms and sprinkle water in the court-yard. I would draw Rangoli unless I am unfit in my natural menstrual cycle. Acharya told me an anecdote of how stupid and arrogant we are as the children of modern age. He once read a shloka ‘वैश्वदेवस्य यः कर्ता तस्य भार्या रजस्वला। भिक्षा तत्र न कर्तव्या यतिना हितमिच्छता।।‘ He construed it to mean: ‘He who is doing Vaishvadeva Homa, means his wife is unfit due to menses and hence Yati should avoid his house for Bhiksha, as it is certainly impure.’ He assumed due to unexposure to real practise that Vaishvadeva is to be done by the person who cooks. So naturally the wife would be ordinarily doing Vaishvadeva everyday. The day she is out, husband would cook and also perform Vaishvadeva. Now, along comes a Yati for Bhiksha and when he sees the husband doing Vaishvadeva, he understands the situation and walks away without having to be told the inside story! The readers are invited to share their interpretation as an exercise-problem to explain the importance of actual exposure to practises to interpret texts faithfully to the intention of the composer. We will answer the correct interpretation in the next issue. Acharya says, his Guruji in Kashi was ammused with this brilliant interpretation which was just false! Ofcourse he was crest-fallen and enlightened simultaneousely when the simple and elegant actual meaning was told by his Guruji.

This Rangoli is different for different clans. It also shows lots of innovations and adaptations. But the idea of fresh and pure household, fit for a ‘Life for Yajnya’ is what is common to all of them. This is our cultural unity in diversity in external form. We will keep sharing these little pieces, if the readers like it.